Writing a novel had been in the back of my mind ever since being a young girl playing with my Grandma’s typewriter.

I’ve been getting a lot of questions about how I started writing my novel. Despite being far from finished (I’m currently editing the first draft) I thought I’d answer a few of the questions I’ve had as a blog post. It is also a great way for me to mark where I’m up to, and celebrate what I’ve managed to achieve so far.

The questions I’ve been asked can be summed up as;

If you have any other questions then please feel free to ask in the comments and I’ll try to answer them.

Looking back to late 2017 I can almost pinpoint the swell of the idea. Me actually writing a book. I say idea because it’d actually felt like something beyond me before then.

I’d already started writing an ebook, something non-fiction that would be a download from my site. The seed of writing something with more weight was there, but something didn’t feel right. I might go back to this in the future as it’s about 70% done, it would be a shame to not put it out into the world, right?

During this time I was having some coaching sessions with Natasha Denness. Between the fortnightly Skype calls, I was reading On Writing by Stephen King. Both these things were key for me. I’ve written about the coaching before here.

With hindsight, it seems so obvious, but at the time I had to peel away many layers to get at the core of what I wanted, needed, to do. When I did, it didn’t feel like a revelation, but more of a realisation, Like it had always been there, whispering to me. I’d not been hearing it because I wasn’t listening closely enough.

Too many distractions, like so many of us and perhaps it’s a case of being ready to hear it too.

I started to make some notes about the ideas I had. More often than not these ideas, of scenes within a story, would come to me just before going to sleep at night.

As the house fell silent the analytical, decision making, child rearing side of my brain went quiet too, leaving space for the ideas to flow. The creative part of my brain kicked in. I had to (I still do) keep a notebook by my bed, or sometimes I’d write out the ideas in my notes section on my phone, that way I didn’t have to put the light on and wake my other half.

So that is how I started writing a novel.

But how did I find the time to do it?

The answer is, no one has the time to write a book. You have to make the time. You have to give something up in order to create chunks of time.

Here are some ideas to find the time to write.

Once you’ve created the time to write, you’ve made it a priority.

Now it’s about creating momentum and sticking with it, even when it gets hard.

For me having a weekly word count target really helped. It meant I could break down the minimum number of words I could do each day and still achieve my target. Mine was 5000 words each week. That means in four months I’d have something resembling a novel. 80,000 words in four months. Some of which are probably nonsensical, but now I had something to mould, something to edit and to improve.

Accountability was also I huge help to me. I joined in with KickStart Your Creative Heart, which is writing from prompts every day for one month and sharing within a small group. The aim being you get into that writing habit of doing something every day. And I joined in with a hashtag on Twitter where we all tweeted our wordcount every Friday.

Lastly, with regards to writer’s block and not feeling “inspired” I carried on. Writing a novel is hard. Some days I was so tired, but I’d still sit and write something, anything, to add to my word count. Even if it was just 300 words. I’d attempt to make it up the following day/week if I fell behind.

Also, I found that blogging here became a little escape too. Yet it kept me writing. The voice here is my voice and it gave my “book brain” a rest.

I didn’t write in a linear way either. I wrote as each scene came to me. This really helped with momentum as it meant if I got stuck on something the whole thing wouldn’t slow down or stop. Although this means my first draft is all over the place. But the point is, I have a first draft and I can move those scenes to the right place in order for them to make sense and tell the story.

Would you like to start writing a novel? Is there a story growing somewhere inside you? Let me know.

If this has fired you up and would like to hear me talk about this topic some more, you can listen to the Going Rogue podcast episode I’m guest of here. Or search Going Rogue on iTunes and I’m episode two.

Pin this to save for later… 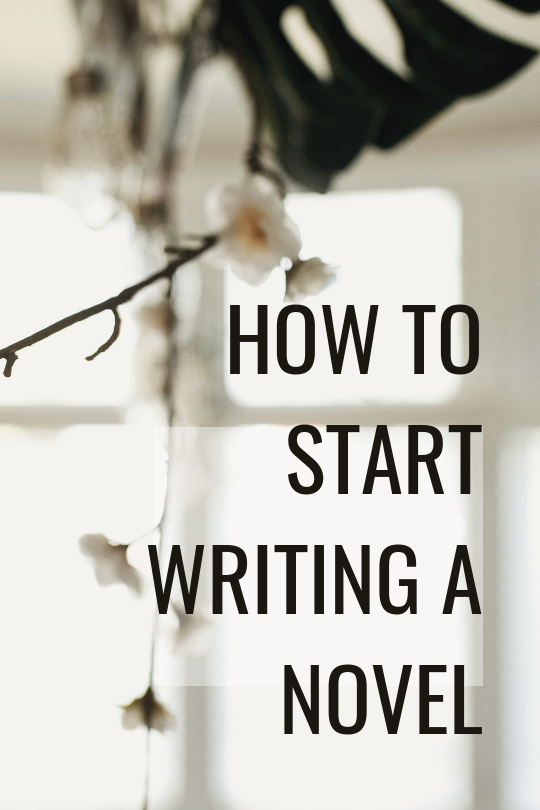 11 thoughts on “How I Started Writing a Novel”